The West Van Old Vets Hockey Group was  formed in 1986 by two West Van residents – Bob Verner and Doug Worth – and have continued to play at the West Van Arena for the past 33 years. Bob Cummings, an original Old Vet, now leads the group. They generously sponsor disadvantaged WVMHA players to permit them to play minor hockey.

When the West Van Old Vets Hockey Group was formed in 1986 (note the leather equipment in the photo at the top of the page), they played two nights a week and ice was plentiful with starting times at 8 PM. The Old Vets were best described as “organized shinny” -- although their jersey sponsors were a testament to their beer league aspirations! There were two regular goalies, eight D-Men and twelve Forwards split into two teams each week by the organizer. They had a few extra regular members and a list of spares and this tradition has continued for 33 years. Originally their average age might have been 45 – 50 but that has increased over the years to around 55 – 60. Incredibly, they have an 80 year old spare and three players in their 70s. It just seems that they just can’t get enough hockey!

Several years ago, several of their players had an interest in sponsoring a Minor Hockey player that would not be able to play without financial relief and they wanted to pass along their passion for the game of hockey so that a West Vancouver youngster would not be denied the opportunity to play. The Old Vets' only criteria is that the player does well in school and has been vetted by the West Vancouver Minor Hockey Association. 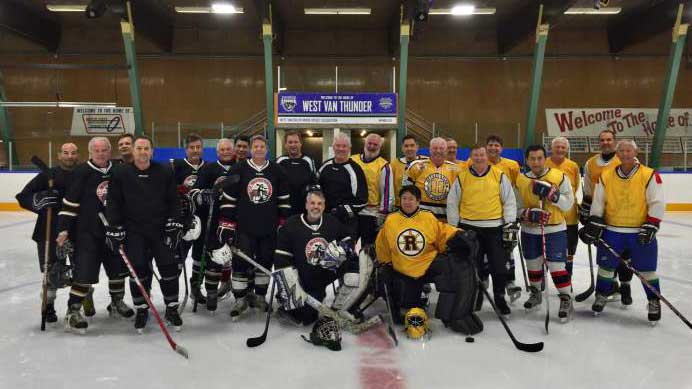 West Van Old Vets -- Ensuring that all kids can play